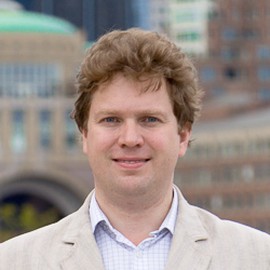 My name is Ivan Lisenkov, and I am a Research Data Scientist at Roku, Inc in Boston, Massachusetts. In my work, I leverage machine learning, statistics, and optimization algorithms. My research helps advertisers optimize their budgets, locate the right audience, and boost campaign performance.

In my free time, I continue my research in Theoretical Physics in the domain of magnetism and spin-waves.

Director of Research and Development

Nonreciprocity, the defining characteristic of isolators, circulators, and a wealth of other applications in radio/microwave communications technologies, is generally difficult to achieve as most physical systems incorporate symmetries that prevent the effect. In particular, acoustic waves are an important medium for information transport, but they are inherently symmetric in time. In this work, we report giant nonreciprocity in the transmission of surface acoustic waves (SAWs) on lithium niobate substrate coated with ferromagnet/insulator/ferromagnet (FeGaB/Al2O3/FeGaB) multilayer structure. We exploit this structure with a unique asymmetric band diagram and expand on magnetoelastic coupling theory to show how the magnetic bands couple with acoustic waves only in a single direction. We measure 48.4-dB (power ratio of 1:69,200) isolation that outperforms current state-of-the-art microwave isolator devices in a previously unidentified acoustic wave system that facilitates unprecedented size, weight, and power reduction. In addition, these results offer a promising platform to study nonreciprocal SAW devices.

An analog microwave signal correlator, based on parametric pumping of a spin wave by an rf magnetic field, is demonstrated. The binary codes to be correlated modulate the two microwave signals input to the device to, respectively, excite the spin wave and rf field at twice the carrier frequency of the spin wave. The magnetic field parametrically pumps the spin wave, generating a counter-propagating idler spin wave, the modulation of which is the cross-correlation of the binary codes. In the experimental device implemented, correlation of codes up to 16 chips in length at a spin wave carrier frequency of 1.2 GHz is demonstrated. The code length is limited by the time available for the parametric interaction as well as the signal bandwidth of the device. Process gain, which quantifies the performance of the correlator in recognizing a given code and rejecting interfering codes, is determined for shorter codes and found to be close to the theoretical maximum for each length. The correlator efficiency, with a bilinearity coefficient of -79 dBm, is poor. However, there remains significant scope for optimization of the experimental device so that correlation of longer codes with improved efficiency will be possible.

It is shown theoretically that in a layered heterostructure comprising piezoelectric, dielectric antiferromagnetic crystal, and heavy metal (PZ/AFM/HM), it is possible to control the anisotropy of the AFM layer by applying a dc voltage across the PZ layer. In particular, we show that by varying the dc voltage across the heterostructure and/or the dc current in the HM, it is possible to vary the frequency of the antiferromagnetic resonance of the AFM in a passive (subcritical) regime and, also, to reduce the threshold of the current-induced terahertz-frequency generation. Our analysis also shows that, unfortunately, the voltage-induced reduction of the generation threshold leads to the proportional reduction of the amplitude of the terahertz-frequency signal generated in the active (supercritical) regime. The general results are illustrated by a calculation of the characteristics of experimentally realizable PZT-5H/NiO/Pt.